The use of nanotechnology in medicine is set to spread rapidly. Currently many substances are under investigation for drug delivery and more specifically for cancer therapy and dealing with different viruses such as HIV, Herpes simplex virus, and adenoviruses.

The cell nucleus is a valuable target for viruses of the type mentioned above and for drug delivery systems as it is the site of gene maintenance and expression regulation. The naturally occurring intra-cellular transportation towards the nucleus is mediated chiefly by the microtubule-associated motor protein dynein. Here, we draw inspiration from viruses (e.g., HIV) that recruit dyneins to actively move towards the nucleus. This type of transport is called "active transport", is characterized by directionally and persistence motion towards the nucleus therefore more effective.

In this project, we aim to mimic the highly efficient transportation properties of native cargoes by rationally designing universally decorated nano-particles (NPs) that could be used for drug delivery applications. We investigate the motion of artificial NPs which grafted with flexible polymers, each ending with a nuclear localization signal (NLS) peptide, thereby allowing recruitment of mammalian cytoplasmic dynein. This unique NP can self-regulate the number of participating dynein motor proteins to optimize their motility properties – engendering persistent motion towards the cell nucleus while being able to go around obstacles that are abundant in the cytoplasm or on the microtubules.

The use of active transport instead of passive has a promising future for therapeutic purposes, both in terms of treatment efficiency and reduced side effects, by reducing the amounts of drug/DNA required for treatment. 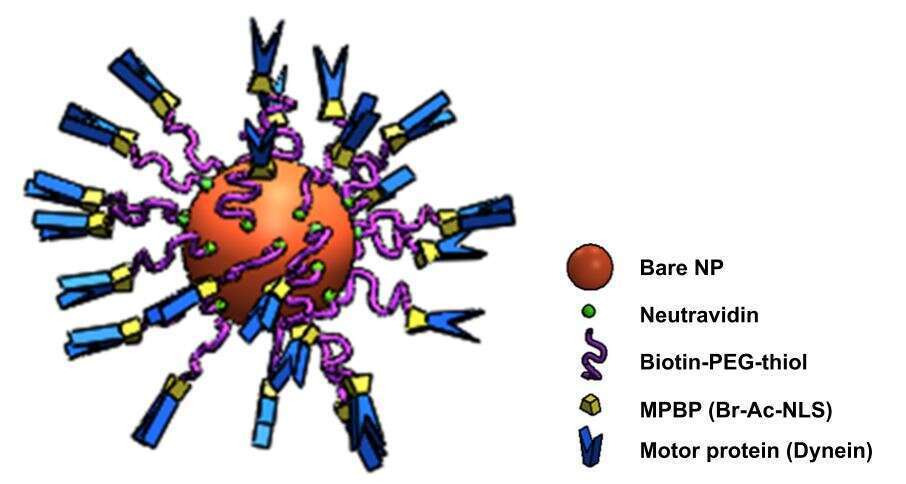