Beam-induced radiation damage is a major limiting factor for structure determination by cryogenic electron microscopy (cryo-EM). Exposure to the electron beam leads to the dissociation of the molecular structure and beam-induced motion that results in loss of resolution [1]. To mitigate these effects micrographs are collected as multi-frame movies, which are dose-weighted and motion-corrected post imaging [2,3]. Besides these negative effects, the progression of radiation damage during image acquisition can provide additional information about the samples. This information is imprinted in the movies collected by the microscope but is often neglected by regular image processing protocols.

Here I show a method for analyzing the radiation damage in cryo-EM movies and use it as a tool for revealing differences in the samples’ composition [4]. My method is based on post-acquisition analysis of regular cryo-EM movies; therefore, it does not require changes in data collection practices. We demonstrate the applicability of this new method by analyzing the structure of biomineral-protein complexes. As a test case, we used a chimeric protein that was specially designed for studying the interplay between a forming sediment and biomineralization proteins.

The inorganic sediments in protein-biomineral complexes can tolerate higher doses in comparison to the organic protein chains. These differences in the electron-dose sensitivity between different chemicals lead to different accumulation of damage in cryo-EM movies. I used these differences to unambiguously segment the shape of the iron-oxide sediment formed in contact with the iron-binding peptide M6A, positioned inside L-ferritin cage. This was achieved by three steps of image processing (Figure 1): The structure of the complex is first determined by refinement and reconstruction of a dose-weighted dataset. The refinement parameters are saved, and a separate reconstruction is performed, using the late frames of the movies to obtain a high-dose version of the same dataset. The resulting maps are compared, revealing the position of the sediment.

Using the radiation damage analysis method I developed, we segmented the sediment in a Fe-O/M6A complex. The segmentation revealed that the M6A undergoes a transition from unstructured to structured forming a helix followed by a loop in response to the growth of the sediment (Figure 2). In its structured form, M6A coordinates the sediment with several negatively charged amino acids [4].

Realizing the potential in using radiation damage analysis, I further developed the program to increase its sensitivity to enable the detection of finer details. Since different chemicals respond differently to the electron radiation, the progression of radiation damage varies across the sample, reflecting its local chemical properties [5]. Analysis of the rate of radiation damage could assist molecular model building processes by identifying radiation sensitive\resistant amino acids, thus adding constraints and fiducial points to the electron density map, thereby facilitating the tedious model building process. Following a similar radiation analysis strategy, reconstructions can be made for each movie frame individually. Doing so results in a movie of 3D volume maps which increases temporal resolution and enables the inspection of the radiation damage accumulation over time. Automatic segmentation of volume maps then facilitates the analysis of whole amino acid side chains, mitigating the noise of individual voxels and revealing differences between radiation sensitive\resilient residues. These markers, which are made ab-initio from cryo-EM data, are then used as indicators to identify the amino acid group identity. This novel approach expands the field of cryo-EM by allowing extraction of previously hidden information directly from cryo-EM data, adding radiation sensitivity “colors” to the black and white data (Figure 3). 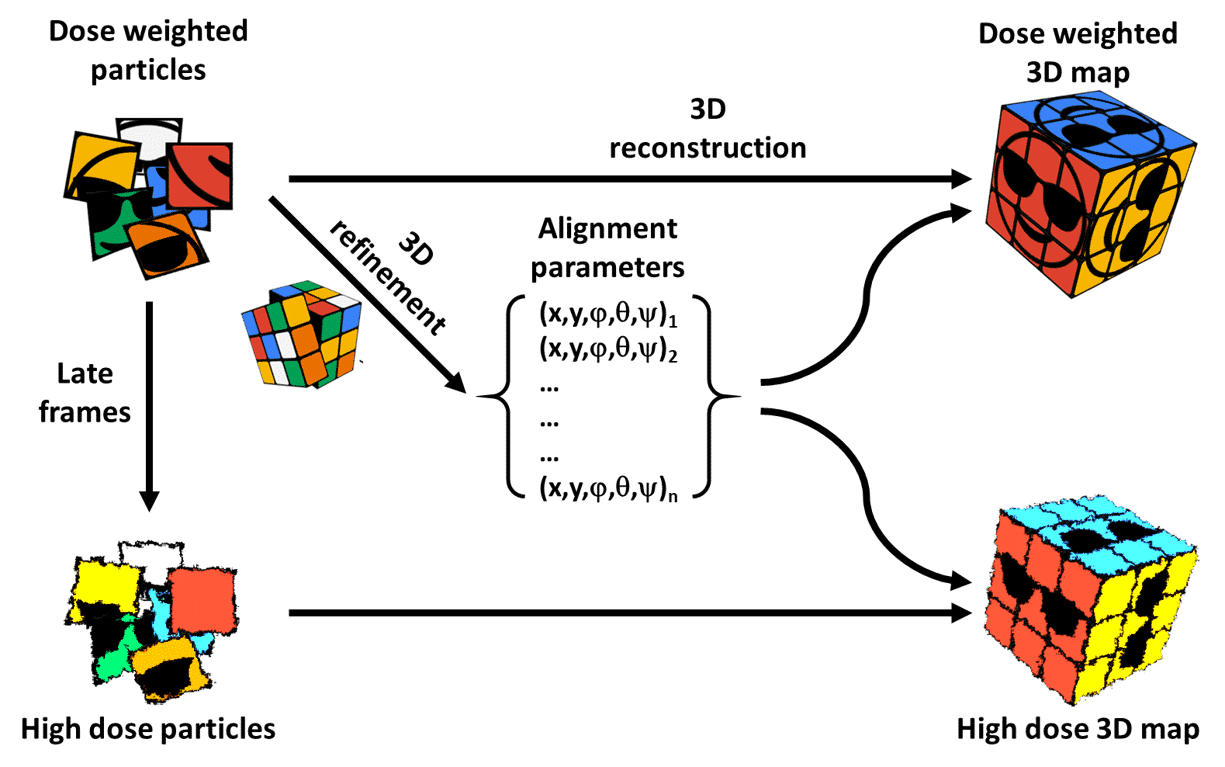 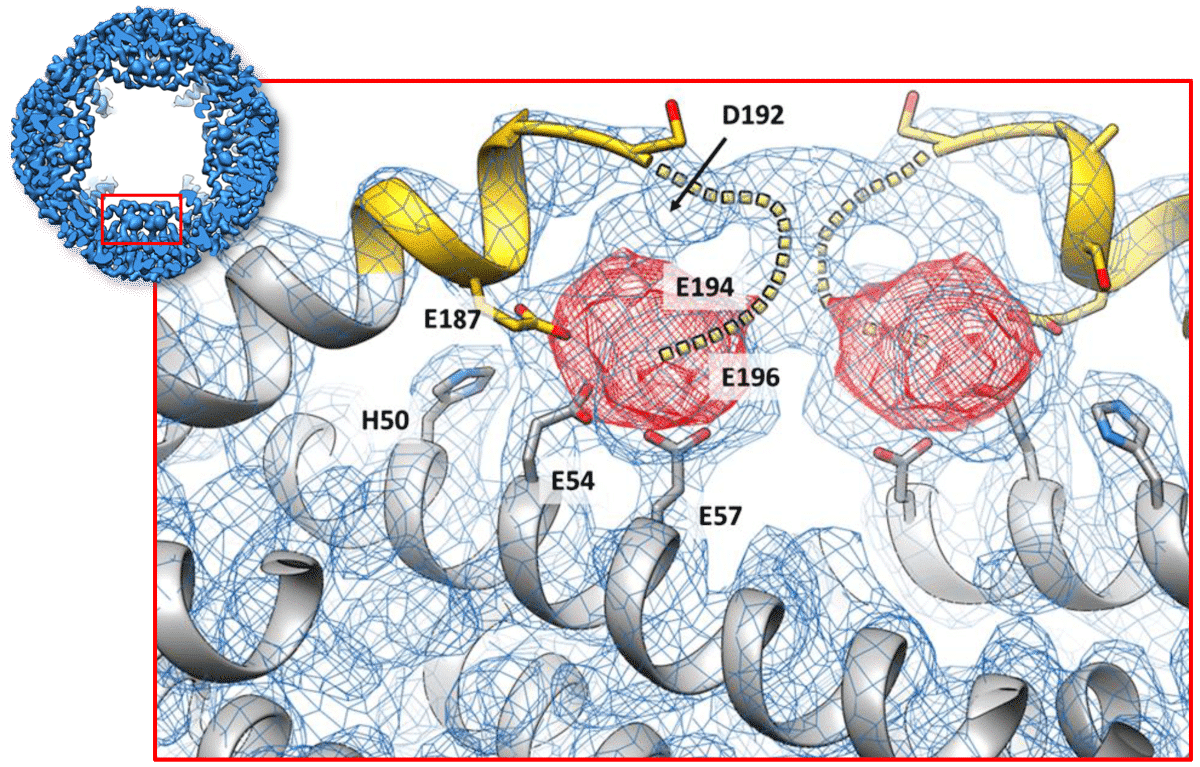 Figure 2: Segmentation of an iron-oxide/protein complex by radiation damage analysis (adapted from [4]). The EM density map of an iron-binding peptide fused to the inner surface and a nascent sediment were reconstructed twice; once as a “regular” dose weighted map (blue mesh) and once only with the late frames (red mesh). The late frames-map shows only the radiation resilient inorganic sediment. The molecular model of the M6A peptide and the L-ferritin is presented as ribbon representation (yellow and gray) respectively. 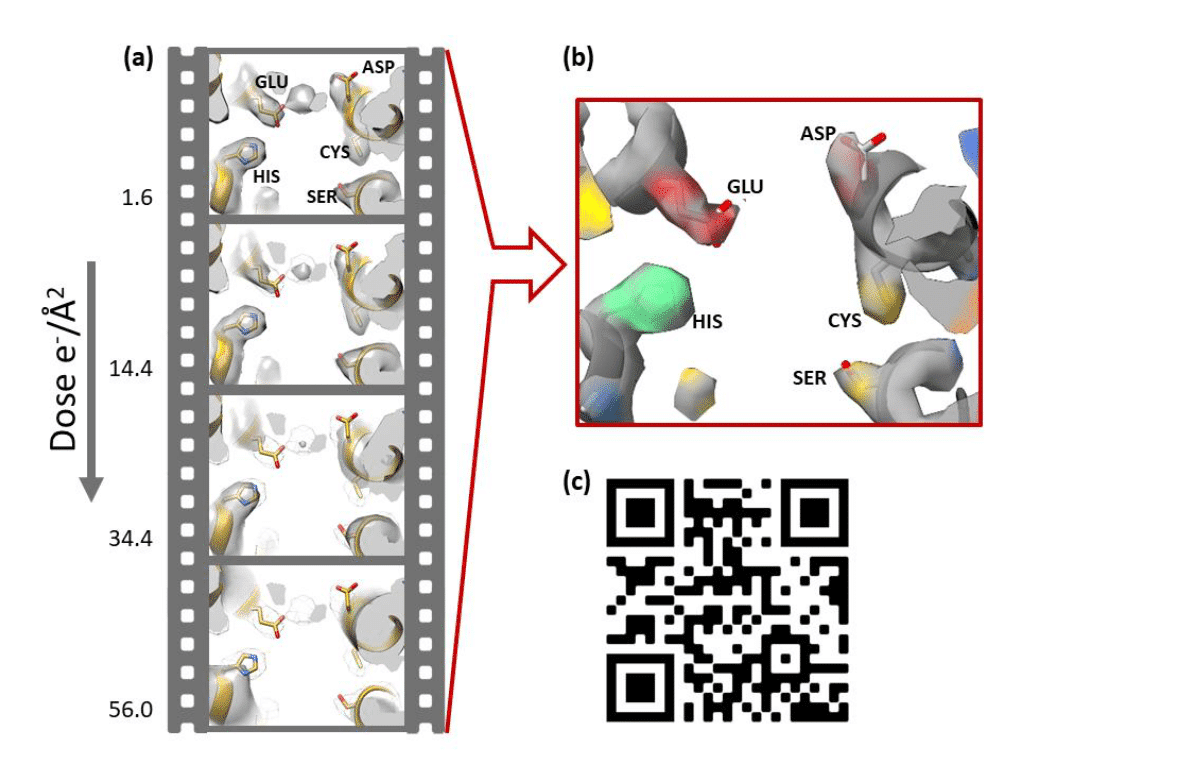 Figure 3: Coloring EM density maps by differences in radiation sensitivities. (a) Time-lapse frames in a 3D movie showing the gradual decay of the signal from different amino acids. Frames were taken from a cryo-EM dataset of L-ferritin. Each frame was reconstructed following my per-frame reconstruction protocol. The densities of various amino acid decay as expected from their respective radiation sensitivity [5]: GLU, ASP > CYS, SER > HIS. (b) the same region as in (a) colored by radiation damage sensitivity (GLU and ASP – red, CYS, SER – yellow, HIS – green). (c) See also the movie: https://youtu.be/Lv7Y6_MgVws. The accumulated dose is in (e-/Å2) is indicated to the left of each frame.