Block copolymers (BCPs) are considered promising materials for various membrane applications ranging from ultra-filtration for water treatment to protein separation due to their ability to self-assemble into highly ordered structures with uniform pore size and high pore density. Imaging of such platforms is typically limited to cross-sectional TEM (CS-TEM) through ultra-microtome slices and top-down SEM. Such techniques allow pore profile viewing (CS-TEM) or pore size analysis (SEM). However, important knowledge on the 3D pore network structure cannot be obtained by these techniques. Moreover, lack of contrast between the polymer blocks limits the correct analysis of BCP membrane complex structure.

In this study, tailored the pore the three-dimensional structure of BCP based ultrafiltration membranes by selectively growing metal oxides inside the pores. Poly (styrene-b-4-vinyl pyridine) (PS-b-P4VP) were used to create ultrafiltration membranes in a process combining self-assembly with non-solvent induced phase separation (SNIPS). This results in one integral but asymmetric membrane, with ordered pores at the top of the membrane and sponge-like mechanically robust support layer at the bottom of the membrane.

Sequential infiltration synthesis (SIS), an atomic layer deposition-based technique that enables selective growth of metal oxides inside the polar domains of BCP, was used to selectively grow AlOx inside the P4VP domains of the BCP film. By incorporating metal oxides in the pores, the contrast between the blocks is enhanced due to the higher atomic number of Al which grows only in the pore forming block of the BCP. The improvement contrast was observed in both CS-SEM (Figure 1a,c) and CS-TEM (Figure 1b,d) comparing a pristine (unmodified) membrane and a membrane after AlOx growth by SIS. Unlike regular staining techniques (such as Iodine selective staining for pyridine groups), SIS is does not decay with time and is less electron beam sensitive, which can allow for imaging over long periods of times, which is required for high resolution three-dimensional characterization. Moreover, by performing SIS, we were able to tune down the pores of ultrafiltration membranes and add functionality, such as hydrophobicity or charge (anionic or cationic modifications). Such modifications were enabled thanks to the AlOx in the pore domain, which is a prime candidate for post modification by simple one-step silane-based reactions. The resulting hybrid Organic-Inorganic-Organic membranes were able to achieve molecular separation based on size and functionality, findings which were recently published in Advanced Materials (Zhang et al. Advanced Materials, 2021). 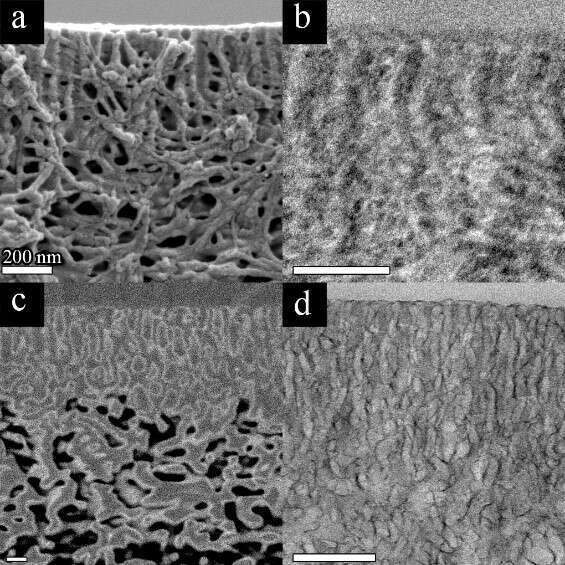 The contrast obtained with SIS allowed to perform three-dimensional characterization of the membranes by performing slice-and-view focused ion-beam SEM (SV-SEM). We observed a superb contrast of SIS-modified membranes compared to the pristine membrane (not shown) which allowed us to easily segment the pores of three-dimensional membrane structure (Figure 2a) with high fidelity to the original non-segmented data (Figure 2b). This in turn allowed to generate a pore network model (Figure 2c) which can simulate flow of water through the membrane. From this simulation we can learn about the membrane’s three-dimensional tortuosity and find the effective water permeability coefficient. Moreover, we can obtain the average pore length and size over the whole three-dimensional structure instead of select CS slices. 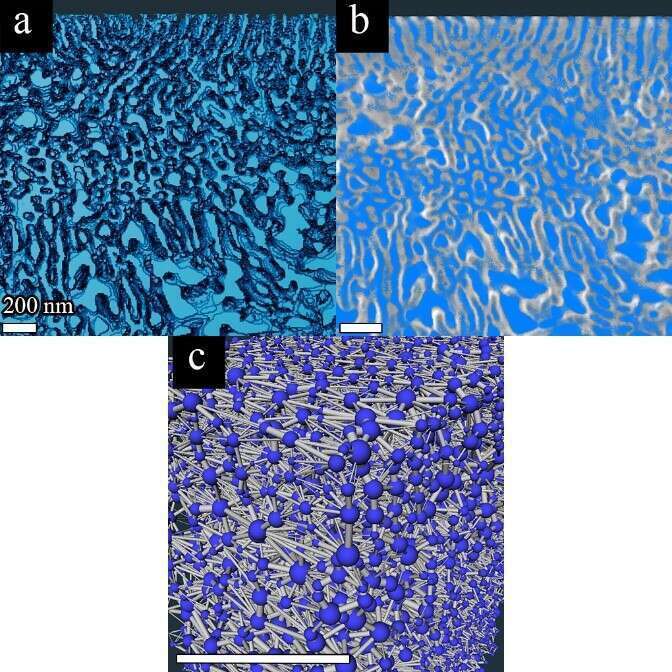 To complement the SV-SEM data and be able to obtain high resolution information about the top selective layer, we performed TEM-tomography, using tilt-series imaging (a video of the reconstructed volume can be found here). A drastic improvement in resolution and contrast of the pores was seen by imaging AlOx modified membranes by CS-TEM (Figure 1d and Figure 3). This enabled us to study the pore geometry and connectivity of the selective layer to the underlying “sponge-like” layer in three dimensions.

We demonstrated the ability to probe the three-dimensional structure of BCP based ultrafiltration membranes by preforming SIS to enhance contrast and perform advanced SV-SEM and TEM tomography techniques. From these tomograms we learned about the membranes’ three-dimensional properties, such as tortuosity and permeability, and probed unique pore geometries. These techniques serve as a major advancement in high resolution imaging of soft matter, since we were able to distinguish fine details in our electron beam sensitive material, in a well-defined matter and in three-dimensions, which can be further implemented in other polymer-based systems.