The ability to image and monitor biological processes is the core function of performing fundamental studies of biochemistry, pathologies, and diseases in human organisms. A new paradigm shift of the whole bioimaging approach is to develop a frontier generation of probes and even whole devices, which will enable performing several functions simultaneously – this is precisely the idea of ‘Theragnostic Devices’. Having the ability of imaging, diagnostics, and therapy at the same time will provide medical doctors with powerful tools for fast, efficient and precision patients treatment. One of the grand challenges to be resolved on pathways for achieving this fundamental goal is the development of nanoscale fully biocompatible and biodegradable imaging and photonic therapy probes with superior light-emitting performances and abilities to be hosted by additional biomedical cargos for targeted drug transport. My Research aims at advancing along with the beforehand mentioned guidelines and develop biocompatible multifunctional platforms for targeted drug delivery. In particular, biocompatible micro- and nano-scale cargoes will be developed and loaded with high contrast fluorescent agents and biological cargoes. The new platform is tested on living cells. Specifically, cell uptake, drug release, and controlled photo release in-situ based on photochemical response and real-time monitoring of those processes is investigated, and their efficiencies will be improved by developing new optical and chemical approaches. 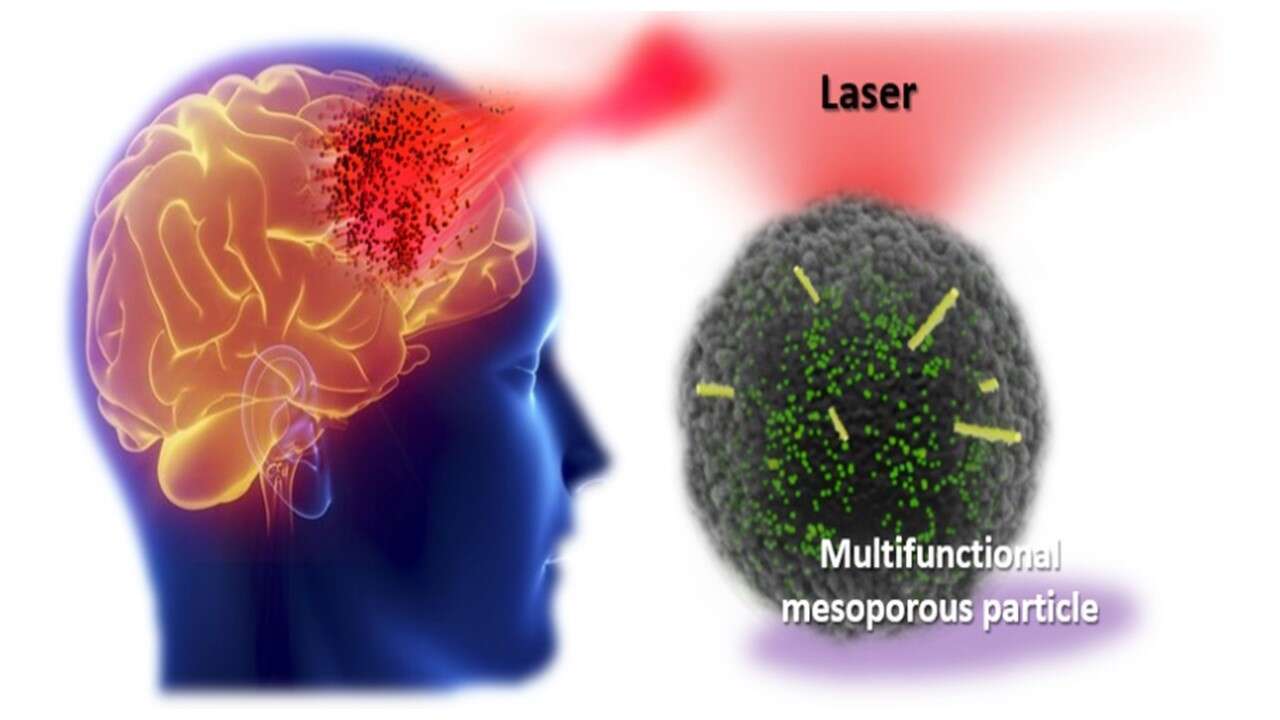 Figure 1. Theragnostic multifunctional probe, based on mesoporous particles, functional cargoes and light-sensitive trigger. The cargo is aimed for a brain tumour treatment.

We use mesoporous calcium carbonate particles, which is shown to be one of the most promising platforms in drug delivery applications. Calcium carbonate (CaCO3) has broad biomedical utilization owing to its availability, low cost, safety, biocompatibility, pH-sensitivity, and biodegradability. CaCO3 has three known natural crystalline forms – vaterite, calcite, and aragonite, where the first one is a metastable polycrystal. vaterite has drawn considerable attention of the scientific community owing to its peculiar optical and biochemical properties, which include porosity and metastability along with practically relevant straightforward and low-cost self-assembly synthesis. Therefore, vaterite particles can be efficiently used as biocompatible containers for delivering relevant therapeutic compounds into living cells and tissues. Moreover, CaCO3 particles can be successfully employed as templates for layer-by-layer synthesis of polymer hollow capsules, which are also commonly used as drug delivery carriers. the main goal is to reveal the full potential of vaterite particles in drug delivery applications. With an emphasis on controlled drug photo induced drug release. The latter will be achieved by systematic studies of their physical and chemical properties by employing advanced optical imaging techniques. By investigating different nanoscale geometrical shapes, which will affect cell uptake rates. More, the Addition of photo active molecules to the loaded composite allow illumination enhanced release. Here the main goal is to find a compromise between load capacity and uptake rate – for this case, nanoscale geometries should be investigated - this topic leaps beyond the current state of the art in the field

Real time imaging and monitoring of small particles are preferentially done by coloring them with fluorescent emitters. Those, in the vast majority of the cases, are based on colloidal quantum dots (e.g. CdSe), fluorescent dyes (e.g. Rhodamine), or proteins (GFP). While the first two classes of light emitters might face biocompatibility issues, the last (for which a Noble prize was awarded) has limitations of bleaching. Another limitation is the cost factor, which might be quite high for fluorescent proteins. We investigate a new novel line of organic-bioorganic materials based on unique coloful carbon nono dots. Based on our recent results, those peculiar systems demonstrate quite remarkable fluorescent properties and are biocompatible by design. Carbon dots are used in metal ion sensing with ability to sense alkaline metals. The goal of this part of the research is to demonstrate a new light emitting platform, which encompasses optical tunability, biocompatibility, two-phton fluorescence, and low bleaching. The grand challenge is to find pathways to achieve lasing, where Carbon dots act as a gain medium – this will allow demonstrating ultra-bright images for theragnostic applications embedded into the Vaterite particles.

Figure 2. (a) Vaterite inside Glioma cells in confocal microscope the cell membrane, cell nucleus, and Vaterite in three different dyes. (b) Glioma cells with tdTomato and Vaterite with carbon dots staining in two-photon fluorescence (c) SEM images of Vaterite after exposure to 450 nm LED with the presence of photoacid (d) 96 plate confocal image of glioma cells after cell live/dead assay, the green fluorescent cells are alive, the death occured in cells after loading Vaterite and drug-phtoacid (e) TMZ drug phto-induced release (f) Viability quantification of cells with drug and triggered photorelease.